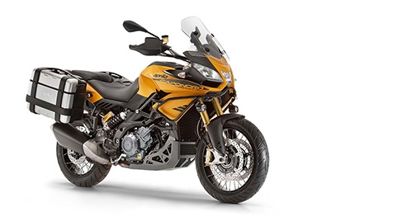 The Aprilia Caponord 1200 Rally is an adventure-focussed version of the Caponord 1200 touring motorcycle. Kitted with a host of rugged styling and functional elements, the Caponord 1200 Rally takes the fight to the BMW R1200GS and the Triumph Tiger Explorer. While the Caponord 1200 Rally edition is mechanically identical to the regular motorcycle, it gets 19-inch spoked wheel, hard panniers, a larger screen and a protector plate for the oil sump. Standard equipment list includes traction control, cruise control, switchable ABS and the aDD suspension system, which can automatically adapt to the road surface and riding style. The Caponord 1200 Rally is powered by a 1200cc V-twin engine which pumps out 128bhp and 116Nm of torque. The liquid-cooled mill comes with a ride-by-wire throttle system with three engine modes, and is mated to a six-speed gearbox. The motorcycle comes laden with the technology developed by the Aprilias championship winning racing division.While the Caponord 1200 is already an exceptional touring motorcycle, the new additions to the Rally edition is expected to boost the motorcycle’s off-roading as well as touring capabilities. It is available in three paint schemes “ yellow, black and grey.