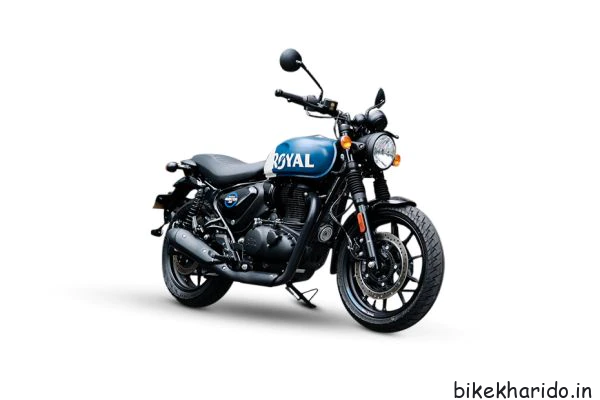 The Royal Enfield Hunter will soon join the Chennai-based two-wheeler manufacturer’s portfolio and compete in the 350cc segment. The new Hunter 350 will share Royal Enfield’s J-Platform with the Meteor 350 and the Classic 350. Thus, it will have the same frame, cycle parts, and engine. The 349cc, air/oil-cooled engine comes linked to a five-speed gearbox and is tuned to produce 20.2bhp and 27Nm of peak torque.

The styling cues will include a neo-retro roadster design that is reminiscent of the Triumph Street Twin. Thus, the new Hunter 350 will feature a single-piece seat, a teardrop-shaped fuel tank, and a round shape for the headlamp, tail lamp, turn signals, and mirrors. The motorcycle is expected to boast a low seat height and carry a kerb weight of around 190-195kg.

The hardware, too, will remain similar to the Meteor 350 and the Classic 350. Thus, the Hunter 350 will use telescopic front forks, twin rear shocks, and disc brakes on both ends. The safety net should include a single-channel ABS.

The Hunter will be the most affordable model from Royal Enfield and it will sit below the updated Bullet 350 that will be launched later this year. So, we expect the Hunter to be priced around Rs 1.30-Rs 1.40 lakh (ex-showroom, Delhi). In terms of competition, the Hunter 350 will rival the likes of Yamaha FZ25, Pulsar 250, and the Suzuki Gixxer.

The company is yet to announce a launch date, but we can expect Royal Enfield to introduce this new model in the second half of July 2022. The bookings should commence a few days before the launch while the deliveries could start in August 2022.