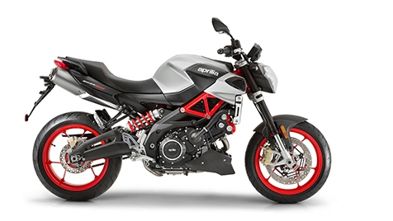 Aprilia launched the Shiver 900 in India along with the Dorsoduro 900. It was launched internationally at the start of 2017 as a replacement to the Shiver 750. The Shiver 900 made its debut at EICMA 2016, where the naked ...

Aprilia launched the Shiver 900 in India along with the Dorsoduro 900. It was launched internationally at the start of 2017 as a replacement to the Shiver 750.The Shiver 900 made its debut at EICMA 2016, where the naked street fighter’s details were revealed. Not only does it get a larger displacement V-Twin engine, but it also gets a comprehensive electronics package. As for its looks, the new front mud guard, fuel tank cover, side panels and the tail fairing make it look sportier than the Shiver 750. Like the Dorsoduro, it is built around a steel-tube trellis frame that is bolted on to aluminium side-plates and gets a bolt-on rear sub-frame.Since the Shiver 900 and the Dorsosuro are based on the same platform, they share various components too.

The motorcycle boasts of a 4.3-inch digital instrument cluster. The background and font colours can be changed to adapt to different ambient lighting conditions in order to optimise visibility. A rider can also pair his smartphone to the bike’s digital screen by opting for the AMP kit. Through this, he can access the contacts and audio files on the go. The electronics package includes features like a traction control system, a two-channel ABS, ride by wire technology with three ride modes – sport, touring and rain.The suspension setup on the bike includes 41mm Kayaba inverted front forks and an adjustable mono shock at the rear.

Braking duties are taken care of by twin 320mm discs with four-piston Brembo calipers at the front and a single 240mm disc with a single-piston Brembo caliper at the rear.The Aprilia Shiver 900 is powered by an 896cc, V-twin power plant that belts out 94bhp of power at 8,750rpm and 90Nm of torque at 6,500 rpm. This mill comes mated to a six-speed gearbox.The Shiver 900 will be sold through the Piaggio group’s Motoplex showrooms in Pune, Chennai, Bangalore, Kochi and Hyderabad. In terms of competition in India, it goes up against the Ducati Monster 821, Kawasaki Z900 and Yamaha MT-09.