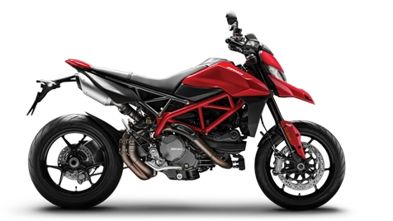 In terms of design, the Hypermotard 950 gets a sharper fairing which exposes more of the trellis frame, a sharper front snout and an aggressively styled headlamp which features LED DRLs. To complete the Hypermotards hooligan supermotor character, Ducati has fitted a long, MX-styled seat and purposeful-looking twin under-seat exhausts.

Ducati might be calling it the Hypermotard 950, but the motorcycle is still powered by the 937cc, L-Twin engine as the previous model. However, the engine has been re-tuned to produce 4bhp more and now comes with a hydraulic slipper clutch mated to a six-speed gearbox. It also gets lighter engine parts that make the unit around 1.5kg lighter. Moreover, the Hypermotard 950 weighs a whole 939kg lesser than the Hypermotard 939.

In terms of electronics, Ducati has equipped the Hypermotard 950 with cornering ABS, three rider modes; Sport, Touring and Urban along with wheelie control and traction control. The bike also sports a full-colour TFT display with the Ducati Multimedia System and Bluetooth Connectivity. The motorcycle rides on Marzochhi-sourced inverted front forks and a Sachs monoshock at the rear. Meanwhile braking is taken care of by 320mm discs for the front and a 245mm disc at the rear held on by Brembo calipers at both ends.

The Ducati Hypermotard 950 is priced at Rs 11.99 lakhs (ex-showroom) and locks horns with the Aprilia Dorsoduro 900 in the country.