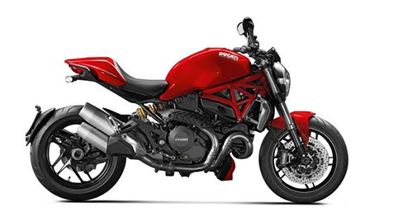 The Monster brand has always been a symbol of raw power and style for the Ducati brand. The Monster brand had a couple of low displacement motorcycle as well, however, over the last few years Ducati has slowly and steadily discontinued those bikes but introduced newer ones as well. The Monster 1200 is one of them. The Monster 1200 retains the traditional design lines of the smaller Ducatis. But, the engineers at Ducati have given this Monster a different kind of finesse and style. The nicely sculpted fuel tank, round headlight flanked by the forks and dual exhaust makes the Ducati Monster 1200 stand out from the crowd.

The Monster 1200 is powered by a 1200cc Testatstretta liquid-cooled engine that produces 133bhp at 8750rpm and peak torque of 118Nm at 7250rpm. This engine is mated to a six-speed gearbox that transfers power to the rear wheel via a chain drive. The bike is equipped with a slipper clutch to take care of the performance needs.The Ducati Safety Pack comes as standard with the Monster 1200. This safety pack comes with an ABS system and an eight-level Ducati Traction Control (DTC).

DTC levels are factory pre-set in each of the three riding modes, but can be individually customised and saved to suit the rider. The new Monster 1200 is equipped with the 1199 Panigale inspired full-TFT instrument panel. The display’s configuration is variable and automatically adapts to variations in environmental light, also changing according to the selected riding mode.The Ducati Monster 1200 is sold in India as a completely-built-up (CBU) unit, which comes from Ducatis home factory in Italy. The Monster 1200 is sold alongside the more powerful Monster 1200S in India.