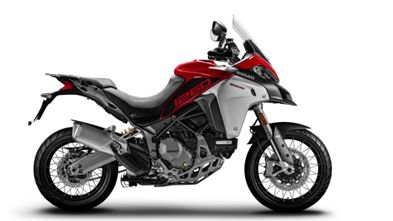 The Multistrada 1260 Enduro is powered by a 1262cc, L-Twin motor that produces 153bhp of power and 129Nm of torque. The unit is mated to a six-speed gearbox with a quick-shifter. In terms of electronic aids, it features a five-inch TFT display, cornering ABS, wheelie control, hill-start control and traction control. The Multistrada 1260 Enduro rides on semi-active Sachs suspension setup on both ends while braking is handled by Brembo callipers for the front and rear.

The Multistrada 1260 Enduro is sold in two colours- Ducati Red and ‘Sand’. The motorcycle competes against the BMW R 1250 GS Adventure and Triumph Tiger 1200 in the country.