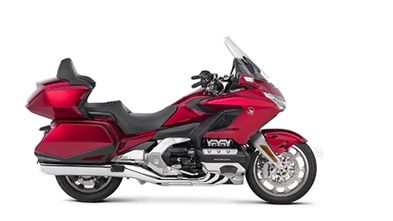 The 2019 Gold Wing is a generation change from the previous Gold Wing. It has gotten 40kg lighter, more powerful, more efficient, and had added a bunch of features that make it the equal of any two-wheeled tourer, and even ...

The 2019 Gold Wing is a generation change from the previous Gold Wing. It has gotten 40kg lighter, more powerful, more efficient, and had added a bunch of features that make it the equal of any two-wheeled tourer, and even some four-wheeled ones. Honda has retained the flat-six engine configuration, but it has shed 6 kilograms over the old engine and added four valves per head. It is also more fuel efficient, so the smaller fuel tank does not mean more frequent trips to the petrol pump.

Four riding modes are now present, and each mode tailors the traction control, throttle response, gear shift points (for the automatic) and the suspension settings. You still get the six-speed manual gearbox, but on the options list is a seven-speed dual-clutch automatic as well. The automatic gearbox has a couple of very interesting features, including a walk mode where it allows the bike to crawl forward at 1.8kph, thus making moving the bike easy for a sole rider. Oh, and the reverse gear is present, too.

ABS with linked brakes is a standard feature, as is hill-hold assist, LED lamps all around, an electronically adjustable windscreen, keyless ignition, and remote-locking panniers. The front suspension has changed from telescopic front forks to a double wishbone type. This has allowed the rider to sit forward further, and reduce the size of the front fairing. Another thing that has reduced is the luggage space, so if you like to ride for a week or two, it might not be enough. However long your rides may be, the 7-inch TFT colour instrument cluster will give you all the information you need clearly, and the audio system has Apple CarPlay included, so your entertainment will not be a problem at all.The Honda Gold Wing competes with the likes of other full-sized tourers like the BMW K1600B, Indian Chief Vintage, Harley-Davidson Road King, and the Moto Guzzi MGX-21.