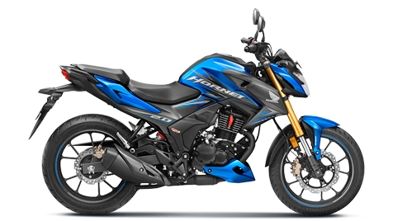 Honda Hornet 2.0 is a street bike available at a starting price of Rs. ₹ 1,35,730 in India. It is available in 2 variants and 5 colours with top variant price starting from Rs. ₹ 1,35,730 onwards. The Honda Hornet 2.0 is powered by 184.4cc BS6 engine which develops a power of 17.03 bhp and a torque of 16.1 Nm. With both front and rear disc brakes, Honda Hornet 2.0 comes up with anti-locking braking system. This Hornet 2.0 bike weighs 142 kg and has a fuel tank capacity of 12 liters. The new Hornet 2.0 replaces the CB Hornet 160R which used to be Hondas one of the highest selling motorcycles. The Hornet brand was known for its aggressive styling and good performance. The new Hornet 2.0 plans to take that to a new level.

The Hornet 2.0 retains the design language of the CB Hornet 160R. But now, it gets cleaner lines and has more bulk that makes it quite striking. Plus, with the presence of golden upside down forks, this Honda looks quite premium. There are other premium bits like LCD instrument cluster, LED lighting and also some practical features like hazard switch.

The Hornet 2.0 uses an 184cc, single-cylinder, air-cooled, fuel-injected motor that produces 16.1Nm of peak torque. This motor is mated to a five-speed gearbox. The suspension duties are taken care of by upside-down forks at the front and a preload-adjustable mono-shock at the back. The bike uses disc brakes at both ends with 276mm disc at the front and 220mm at the rear. Single channel ABS is standard.

The new Hornet 2.0 is available in four colours: Pearl Igneous Black, Matte Sangria Red Metallic, Matte Marvel Blue Metallic and Matte Axis Grey Metallic. At a small price premium over these standard colours, one can also get the Repsol edition of the bike which is inspired by Hondas Repsol race machines. The Hornet 2.0 goes up against the TVS Apache RTR 200 4V and the Bajaj Pulsar NS200.