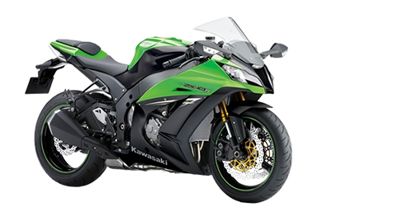 The Kawasaki Ninja ZX-10R is the Japanese bike makers second big machine after the Ninja ZX-14R. Launched for the Indian market in its latest avatar in September 2013, the Kawasaki Ninja ZX-10R is powered by a 998cc inline-four liquid cooled engine that develops 200PS and is mated to a six-speed sequential gearbox. The motorcycle features the S-KTRC (Sport-Kawasaki Traction Control) system making this machine a perfect track day tool. The Ninja ZX-10R gets three modes- full, Low (which limits power to about 60 per cent of full) and middle mode, which falls between the two. It also gets Kawasaki Intelligent Antilock Braking System (KIBS), adjustable foot pegs, electronic steering damper from Ohlins and has more rigid swingarm than its rivals. The ZX-10R gets LED backlight instrument panel which adjust the brightness automatically.On the styling front, the ZX-10R takes some of its design from the larger ZX-14 but stands out on its own thanks to the smaller wheelbase, different shaped faring, stubby exhaust and obviously the alloy wheels. It is priced at Rs 16.40 lakh (ex-showroom Delhi) and competes with the Yamaha R1, Honda CBR1000RR, Suzuki GSX-R 1000, BMW S1000RR and Aprillia RSV4.