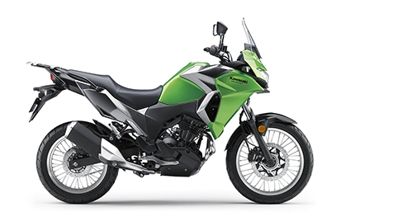 Kawasaki has finally started selling its entry-level adventure touring motorcycle, the Versys-X 300 in India.Built around the same 296cc motor that is seen on the Ninja 300, the Versys-X 300 is currently the most affordable twin-cylinder adventure touring bike in the country. Its multiple attributes, including long travel suspension, spoked-wheels and 19-inch front wheel, have made this quite a versatile motorcycle. On the other hand, it doesnt get full-offroad spec tyres and bash plate, which makes it less exciting for adventure enthusiasts. The 296cc parallel-twin motor produces 38.5bhp of peak power and 27Nm of maximum torque which is mated to a six-speed gearbox. The stopping power for this Kawasaki is taken care of by a 290mm single disc in the front and a 220mm disc at the rear. ABS is standard for this motorcycle. Kawasaki is currently offering the Versys-X 300 with only one paint scheme, green/grey. It is assembled at their new Chakan plant and is being sold through all Kawasaki showrooms. This Japanese adventure touring bike competes with the BMW G310R which is expected to be launched next year.