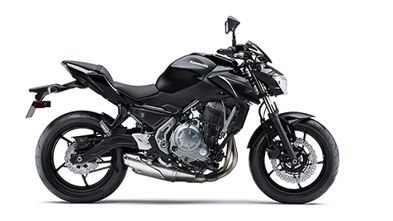 Kawasaki has introduced the Z650 to modernise and reposition the ER-6n in its 2017 line up. The Z650 will sit above the Z250 and below either the Z800 or the Z900 in Kawasakis Z line of motorcycles.The Z650 appears to be inspired by the Sugomi design of the Z1000. According to Kawasaki, its condensed appearance is emphasised by slim, close-fitting bodywork. The bike also uses an instrument cluster featuring an analogue-style tachometer with a gear position indicator at its centre, sitting atop a multi-function LCD screen, similar to the new Ninja 650.

The new sharper styling along with the aggressively raked tail makes this motorcycle appear more like a sport-naked than a naked-tourer.The chassis and swing arm have also been redesigned, and the monoshock has now been moved to a more conventional position above the swing arm as opposed to the previous models offset orientation.While the parallel twin engine still displaces 649cc, it is now Euro IV compliant. The power output has been dropped to 69bhp from 71bhp, the engine according to the company has been tuned to offer better low and midrange torque. The six-speed transmission also gets a slipper clutch. The manufacturer states that, it is also 6.8 per cent more fuel efficient than the older engine. The Z650 is also 19 kilogram lighter than the ER-6n.