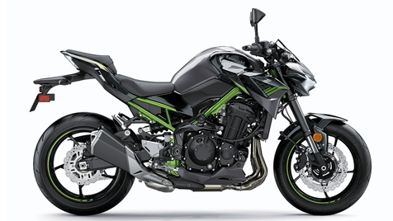 Kawasaki Z900 is a super bike available at a starting price of Rs. 8,16,874 in India. It is available in only 1 variant and 2 colours. The Kawasaki Z900 is powered by 948cc BS6 engine which develops a power of 123.64 bhp and a torque of 98.6 Nm. With both front and rear disc brakes, Kawasaki Z900 comes up with anti-locking braking system. This Z900 bike weighs 212 kg and has a fuel tank capacity of 17 liters. Kawasaki has taken the wraps off the new Z900 at the 2019 EICMA in Italy. And for 2020, the streetfighter sports cosmetic changes as well as an updated electronics suite.

The 2020 Z900’s most distinctive styling change is the new full-LED headlamp that looks aggressive and follows Kawasakis Sugomi design. The tank shrouds are sharper too and the tail section is sleeker. However, the major change comes in the form of an updated electronics package which includes a Bluetooth-enabled colour TFT screen. It also gets a three-mode KRTC (Kawasaki Traction Control) and two power modes which adjust power to suit rider preferences.

Kawasaki is offering the new Z900 in two colour schemes- Metallic Graphite Gray and Candy Lime Green. Apart from this, the streetfighter remains mechanically similar to the previous Z900 which was sold in India. It comes powered by a 948cc, liquid-cooled, inline four-cylinder engine that produces 123.6bhp at 9,500rpm and 98.6Nm at 7,700rpm.