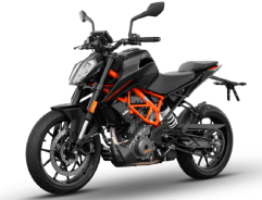 The KTM 390 Duke is powered by 373.2cc BS6 engine which develops a power of 42.9 bhp and a torque of 37 Nm. With both front and rear disc brakes, KTM 390 Duke comes up with anti-locking braking system. This 390 Duke bike weighs 167 kg and has a fuel tank capacity of 13.5 liters. The 2020 KTM 390 Duke continues with the same aggressive streetfighter styling inspired by the bigger 1290 SuperDuke. However, as part of the update, the motorcycle gets new graphics and two new paint schemes.

It is available in Silver Metallic and Ceramic White colour options that come with orange wheels and trellis frame. Nevertheless, the major upgrade comes in the form of the KTM Quickshifter Plus which is offered as standard equipment. The Quickshifter Plus is a bi-directional unit that enables clutchless upshifts as well as downshifts.

The 390 Duke comes powered by a BS6-compliant version of the 373cc, single-cylinder mill. KTM has retained the power figures and the Duke continues to produce 42.9bhp and 37Nm. Apart from these changes the streetfighter remains unchanged. It sports a colour-TFT screen that can be connected to the riders smartphone via Bluetooth. Moreover, the 390 Duke also has riding modes and ride-by-wire as part of its electronic kitty. In terms of cycle parts, the bike rides on inverted forks up front and a monoshock at the rear. Meanwhile, braking is done by disc brake at both ends along with ABS.