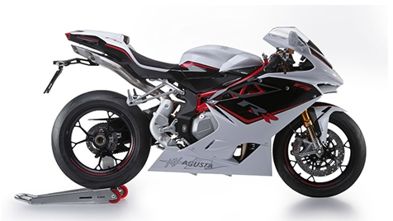 The original F4 1000 was designed by the celebrated Italian automotive designer, Massimo Tamburini, over a decade ago. Such was the artistic impact of the F4 1000 that the 2016 model still carries considerable influence of the original model. The ...

The original F4 1000 was designed by the celebrated Italian automotive designer, Massimo Tamburini, over a decade ago. Such was the artistic impact of the F4 1000 that the 2016 model still carries considerable influence of the original model.The front of the F4 gets a diamond-shaped headlamp flanked by two guide lights, while lines have been sharpened to improve the aerodynamics. The trademark four-pipe exhaust system peeps out from under the pillion seat. The MV Agusta F4 RR is built on a steel tubular trellis-frame, with a single-sided aluminium swingarm. The lightweight CrMo (Chromium Molybdenum) construction of the frame has helped MV Agusta restrict the bikes dry weight to just 190kgs.

The F4 RR packs a 998cc inline four-cylinder engine, which delivers 198bhp and 111Nm of torque through a six-speed gearbox. The peak rev limit has been raised to 14,000rpm.The F4 RR gets a slight power bump and a host of more technology. Suspension components on the non-RR F4 are top-shelf items from names such as Marzocchi and Sachs, but the RR takes it to a whole new level with an electronically-adjusted –hlins monoshock and 43mm, inverted front forks.

Components on both ends come with manual, spring-preload adjusters and 4.7 inches of wheel travel. Additionally, an electronic interface allows you to choose between pre-set compression and rebound maps. These maps come bound to the Motor and Vehicle Integrated Control System (MVICS), but you have the option of changing the suspension map independently in response to changing driving conditions. The steering damper can also be manually adjusted, or left on automatic to adjust steering stiffness electronically based on bike speed.The MV Agusta F4 RR is available in two colours “ White Ice Pearl/Metal Black Carbon and Avio Grey/Black Carbon.