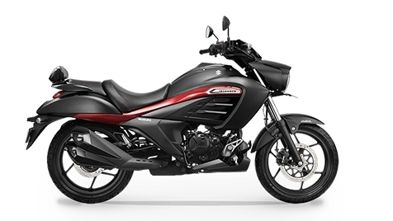 Suzuki Intruder 150 is a cruiser bike available at a starting price of Rs. 1,28,814 in India. It is available in only 1 variant and 3 colours.

Suzuki Intruder 150 is a cruiser bike available at a starting price of Rs. 1,27,987 in India. It is available in only 1 variant and 3 colours. The Suzuki Intruder 150 is powered by 155cc BS6 engine which develops a power of 13.4 bhp and a torque of 13.8 Nm. With both front and rear disc brakes, Suzuki Intruder 150 comes up with anti-locking braking system. This Intruder 150 bike weighs 152 kg and has a fuel tank capacity of 11 liters. The Intruder is Suzukis 155cc modern cruiser which derives its name as well as styling from the big-daddy M1800R which, among other things, had the widest rear tyre on a production motorcycle when it was launched.

The Intruder shares its powertrain with the Gixxer “ a 155cc single-cylinder air-cooled unit. Its BS4 version already had an option of fuel-injection which received a few more engine upgrades to comply with BS6 norms that came into effect on 1 April 2020. These changes resulted in a slight drop in its power figures over the BS4 model which now stand at 13.4bhp at 8,000rpm and 13.8Nm at 6,000rpm. The engine comes mated to a five-speed gearbox.

The 140mm wide rear tyre on this motorcycle gives it a muscular aesthetic appeal and that feeling is echoed when you sit on the motorcycle “ those tank extensions make the Intruder feel a whole lot wider than it is, and it thus feels like a whole lot more motorcycle as well. The seat is also a lot wider than a standard seat, but it is very low as well, offering confidence and comfort to the cruiser aficionado.

The Intruder does look odd from certain angles “ that tail lamp and surround echoes the lines of the GSX1300R Hayabusa, but most people will not pick that bike for design inspiration, to begin with. The exhaust design looks great from a distance but up close the daylight behind the mesh at the tip doesnt look good. However, if a modern 150cc cruiser is what youre looking for, you cant currently do better than an Intruder on both looks and handling.

The Intruder has three paint options: Silver, Black/Red and Black/Silver. Considering the purpose and displacement of the motorcycle, this Suzuki goes up against the Bajaj Avenger 160 Street.