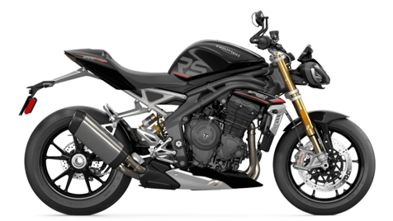 The 2021 model also gets a revised exhaust setup. The under-seat exhaust outlets from the discontinued model have been replaced by a single-sided unit. Triumph Motorcycles claims that the new model is 10kg lighter than the discontinued version. The motorcycle is available in two colour options “ Sapphire Black and Matte Silver Ice.

The latest iteration, as the name suggests, gets a bigger engine than its predecessor. The new Speed Triple 1200 RS uses a 1,160cc, inline three-cylinder engine as against a 1,050cc motor on the old model. The new engine makes 178bhp, which is 30bhp more than the previous model. The maximum torque is rated at is 125Nm. The six-speed gearbox benefits from a slip and assist clutch function along with a bi-directional quickshifter as standard.