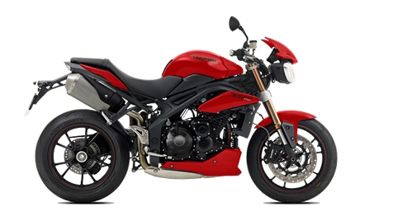 The Speed Triple is one of the most recognisable motorcycles from Triumph. The 2011 model of the naked streetfighter is more powerful, lighter, sharper and most importantly, wilder than its predecessors. Despite the way it looks, the Triumph Speed Triple ...

A new twin-tube, twin spar frame chassis makes the bike much leaner and agile. The Speed Triple has been styled very aggressively lending it a muscular look, though it is more ergonomic than the previous version. The restyled bodywork is minimalist and stripped down. The handle bars are set low giving the rider a forward leaning position. The 2011 model ditches the chrome round headlamps in favour of pentagonal black ones.

The Speed Triple ABS is powered by a liquid-cooled three-cylinder 1050cc engine, which churns out 133bhp and 111Nm of torque. The fuel-injected unit is connected to a six-speed manual gearbox with a wet multiplate clutch and a light weight three-into-two exhaust system.The Speed Triple ABS is very much a raw machine with very few electronic rider aids including ABS. It gets a part digital, part analogue instrument cluster which houses gear change lights, service interval reminder, lap timer, trip computer and a fuel gauge.The Triumph Speed Triple ABS is available in three colour schemes – crystal white, matt caspian blue and goes up against the Yamaha FZ1, Honda CB1000R and the Kawasaki Z1000.