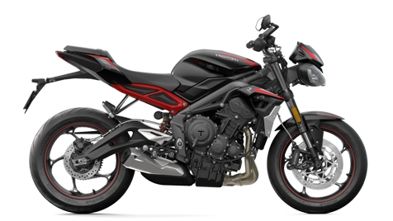 Triumph Street Triple R is a super bike available at a starting price of Rs. 9,36,611 in India. It is available in only 1 variant and 2 colours.

The instrumentation setup of the R comprises of a cheaper LCD display with analogue tachometer, as against the RS more premium TFT display. Other features which come as standard in the R include up-down quick shifter, traction control, three riding modes and full LED lighting.

Powering the motorcycle is a BS6-compliant, 765cc, inline triple cylinder engine which produces 116bhp and 77Nm of peak torque and comes mated to a six-speed gearbox. Notably, the RS trim of the bike makes more power at 121.36bhp. The premium hardware package of the Street Triple R comprises of Showa suspension, Brembo brakes and Pirelli Diablo Rosso III tyres.

The Triumph Street Triple R goes up against the KTM 790 Duke, Kawasaki Z900 and the Suzuki GSX-S750.