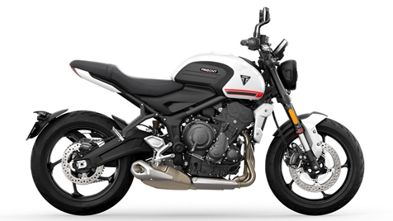 Triumph Trident 660 is a street bike available at a starting price of Rs. 7,58,000 in India. It is available in only 1 variant and 4 colours.

Triumph Trident 660 is a street bike available at a starting price of Rs. 6,95,000 in India. It is available in only 1 variant and 4 colours. The Triumph Trident 660 is powered by 660cc BS6 engine which develops a power of 80 bhp and a torque of 64 Nm. With both front and rear disc brakes, Triumph Trident 660 comes up with anti-locking braking system. The Trident is Triumphs latest take on the middle-weight street bike and it is the British bike makers most affordable offering not just in India but globally. It is an entry point for beginners into this premium brand while being accessible, friendly, and fun.

The Trident features a distinctive roadster styling that is modern yet boasts certain retro-inspired elements such as a round headlamp and instrument cluster. It also incorporates a circular fuel tank with deep recesses and a floating tail with a single-piece seat. Just like most Triumphs, the Trident is as modern as it can get in terms of gizmos with full-LED lighting and a digital console. It also gets a ride-by-wire throttle, switchable traction control, and two riding modes “ Road and Rain.

Powering the Trident is a 660cc, inline triple-cylinder, liquid-cooled engine which is capable of dishing out 79.8bhp at 10,250rpm and 64Nm of peak torque at 6,250rpm. Transmission duties are carried out by a six-speed gearbox that can be accompanied by an optional quick shifter. It is based on a tubular steel perimeter frame and rides on 17-inch cast-aluminium alloy wheels shod with Michelin Road 5 tyres. Damping duties are handled by upside-down forks and a monoshock, while speed shedding is done by a pair of 310mm twin discs for the front and a 255mm single disc at the back “ both held on by Nissin calipers.

Triumph has launched the Trident at Rs 6.95 lakh (ex-showroom, pan India). In terms of displacement and body style, it competes against the Kawasaki Z650 and the new Honda CB650R.