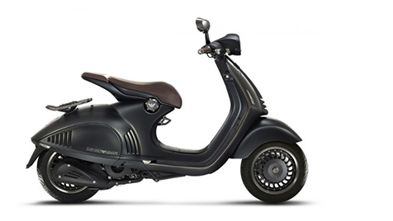 Vespa 946 is now discontinued in India.

The Vespa 946 Emporio Armani is the Italian marque’s flagship scooter developed jointly with fashion designer Giorgio Armani. A commemoration of the 130th anniversary of Piaggio Group, the scooter has been produced in a limited production run of just 946 units worldwide. The “946” in the moniker refers to the year that this scooter was first made “1946, while Emporio Armani is the name of Giorgio” fashion house.

The curves, swoops and vents inspired by the original Vespa evoke nostalgia while features like LED lamps and a digital console give it a modern touch. The leather seat, grips, rubber inserts on the floor and optional accessories like the leather bag are colour coordinated.Built on a monocoque chassis, the Vespa 946 Emporio Armani is powered by a 125cc three-valve, fuel-injected single-cylinder engine.

The engine delivers 11.4bhp and 10.3Nm of torque. The 946 Emporio Armani gets disc brakes for both the wheels with ABS as standard. The astronomical price tag and its limited run make the Vespa 946 Emporio Armani one of the most exclusive scooters on sale. Being a niche product, it doesn’t have any competition in the Indian market.